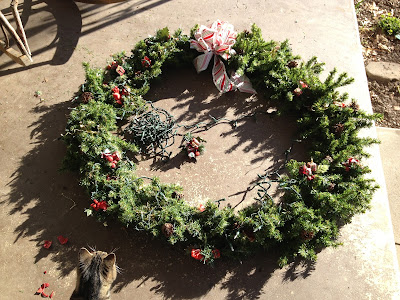 found this HUGE wreath on the side of the road
on my way home from taking a load to the thrift store today
at first I thought
it must have blown off the chimney of the nearby house
but decided it was too far away from the chimney
and the house
and had been intentionally thrown out
because it was on the ground
where the owner typically parks her trash cans
“one gal’s trash is another’s TREASURE”
right?!
yes, I am aware that I have turned into my mother
I am perfectly fine with the fact
that I am now doing to my children
and my niece
( who happened to be with me today when I found the wreath)
what I SWORE as a child
I would NEVER do
because I was MORTIFIED
more times than I can count
as Precious was/is notorious for finding
“TREASURES” on the curb.
what I once thought was
embarrassing & cheap
I now view as being
wise,
frugal,
a good steward
I think more people “shop” the curb than are willing to admit it
and those who haven’t “shopped” the curb
wish they had the nerve to.
actually saw a guy pick up some chairs
that sister banker and I had drug to the curb
after cleaning at her house today
many who have visited our home
have heard our
sock shop to house
transformation story
and have seen and know
more of what we have
has been found than bought
and what has been bought
has been
jewwed down..(that’s southern for: bought a bargain)
but even better than a good “jew”
is a “treasure”
found
and why I am thankful#24: trash
ps. if the owner of this wreath reads this post and DID NOT throw this GREAT wreath out on purpose and DO WANT it back ..I will gladly return it ;o)