11 For unto you is born this day in the city of David a Savior, who is Christ the Lord.

I read a great post this morning, Catching Wonder, One Star at a Time.
In her post the writer spoke of the “catch-your-breath” beauty of a falling star.

I saw my first falling star just a few weeks back while camping at Crow Mountain Guest Ranch.
Standing around the camp fire
Laughing, chatting and enjoying friends
when as though someone tilted my chin towards Heaven
I SAW IT!
streak across the sky
leaving only a trail of diamond dust behind
prompting me
to instantaneously SWAT!
my pal next to me
almost knocking him out of his boots

My pal did not.
but I did.
and I made a wish.
I pray it comes true.

we’ll have to wait and see.?

The writer of the post mentioned above challenged her readers to take a photo of a star a day for the month of December. 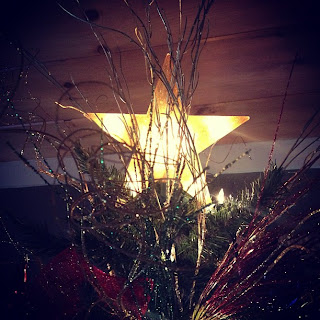 Matthew 2: After Jesus was born in Bethlehem in Judea, during the time of King Herod, Magi[a] from the east came to Jerusalem 2 and asked, “Where is the one who has been born king of the Jews? We saw his star when it rose and have come to worship him.”
9 After they had heard the king, they went on their way, and the star they had seen when it rose went ahead of them until it stopped over the place where the child was.10 When they saw the star, they were overjoyed.11 On coming to the house, they saw the child with his mother Mary, and they bowed down and worshiped him.

My prayer:
If you have not made
Jesus, the Son of God
the Creator of the stars!!
LORD OF YOUR LIFE
you will.
And may this season
become
for you
“THE MOST WONDERFUL TIME of the YEAR”