yes I realize it’s the 9th and I’ve missed two days or maybe even three and I said I would post every day in September but as it turns out -some days we have to choose..and last night I chose my husband and a mushy gushy movie, Out of Africa and night before I chose rest because  had I not I may have died from sheer exhaustion because I’m not as good as I once was and picking up hay and how it may be the death of me which is what I am going to write about soon but not tonight because I’ve missed Cowboy Dan, you know? my husband.? yea. he reminded me that he still lives here and he misses me too and we just bought the 2nd season of Duck Dynasty and we have a date in our living room right now..so until tomorrow I’m reposting an oldie but a goody from June of last year :O)enjoy
*******************************************
it happened this afternoon 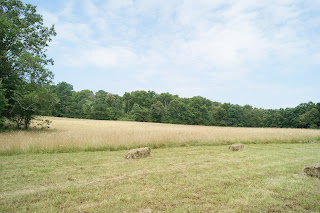 in the most unexpected of places
Cowboy Dan, Mighty Mouse, Tuck, two of our strong young friends
and me
headed to the hot, hot hayfield
to
rake
bale
pick up
load
and unload
HAY to GLORY!
About an hour or so past noon
Our two strong, young friends and Tuck
headed to the barn to unload
a trailer of 200+
while Cowboy Dan and I continued
our game of cat and mouse
back and forth across the pasture
I rake
He bales
we make a good team
Mighty Mouse snuggled tight in my lap growing more weary with each lap around the field 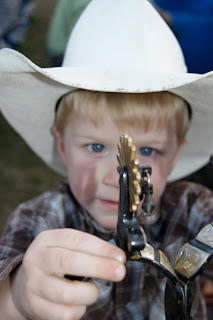 began to serenade me with his sweet songs
(be still my heart.)
(my cup runneth over)
his precious 4 year old little voice
should be bottled and sold
it’s so stinkin’ cute
as his songs began to slow to the tempo of a radio with a weak battery he began to waller
(waller=to move or flop from side to side in a miserable fashion when you’re hot and give slap out!)
his sweet songs
became a whisper & with his precious little face full of freckles gazing up at me
his head against my chest
blinks slowing
lashes lingering
when just like….
my sweet baby boy was sound asleep
in the middle of the hayfield in hot, hot June
on the big orange tractor
in his momma’s lap
and I’ll just tell ya’ as far as I’m concerned…
there isn’t a a sound so sweet
or a wine so fine
as when my baby’s heart beats so close to mine